The campaign calling for the end of persecution against Palestinian human rights defender Salah Hammouri.

Get up-to-date with the most recent coverage and campaign releases. 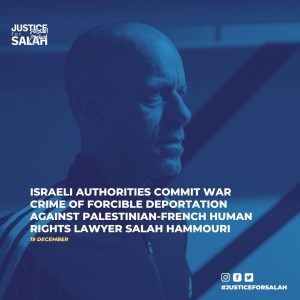 Such a move constitutes a war crime of forcible deportation of a protected civilian from the occupied territory, as defined in Article 49 of the Fourth Geneva Convention. More importantly, it stands as a horrifying escalation of Israel’s systematic practice of demographic engineering and ethnic cleansing of Palestinians from occupied Jerusalem. 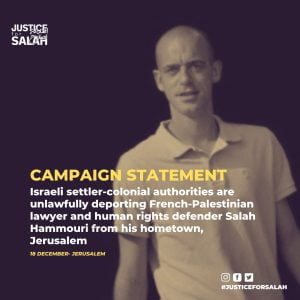 The Israeli settler-colonial authorities are unlawfully deporting French-Palestinian lawyer and human rights defender Salah Hammouri from his hometown, Jerusalem, to France for “breach of allegiance” to the occupying state. 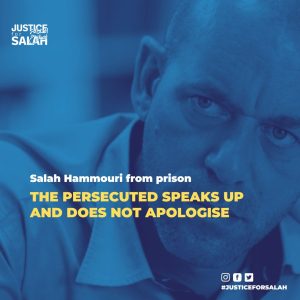 Salah Hammouri from prison: The persecuted speaks up and does not apologise

Detained by Israel and threatened with deportation, Palestinian human rights lawyer writes from prison a letter of defiance, refusing to apologise for standing up to the occupation and colonisation of his homeland. 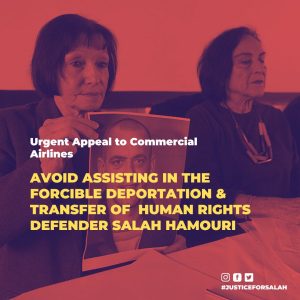 Israel has recently announced it will imminently deport Palestinian human rights defender Salah Hamouri, an act that could be a serious violation of international law.

The “Justice for Salah” campaign aims to end the Israeli settler-colonial regime’s persecution of Palestinian lawyer and human rights defender Salah Hammouri and raise awareness about the systematic and brutal policies against the Palestinian people.

This campaign aim to accomplish the following goals:
Get involved
Download the infographic 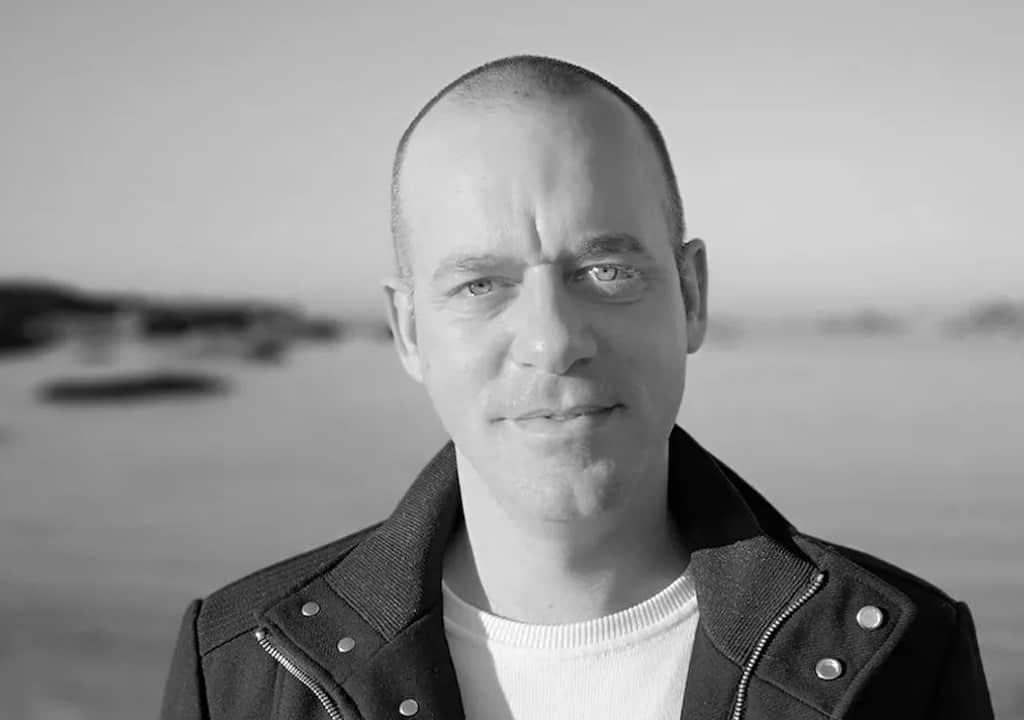 Salah was born in 1985 in Jerusalem, Palestine, to a Palestinian father and a French mother. His life was shaped by the experience of growing up amidst the grave injustices of Israeli colonisation and occupation, witnessing its daily violence and brutality.

A symbol of justice

Salah Hammouri is a French-Palestinian lawyer, Human Rights Defender (HRD), and former political prisoner who has become synonymous with the Palestinian struggle for justice in Jerusalem.

Salah is presently held under administrative detention, with no charges and no trial, while facing the imminent threat of deportation, giving a renewed urgency to the growing campaign for his freedom.

Salah was transferred to Hadarim a high security prison, as punishment for exercising his freedom of expression and sending a letter to the French head of state Emmmanel Macron asking him to act. We invite you all to write a letter to our beloved Human Rights Defender, Salah Hammouri, and send it to the following address:

DO NOT WRITE YOUR OWN ADDRESS ON THE ENVELOPE

Instantly send a tweet to Urge the new French Minister of Foreign Affairs to pressure Israeli authorities to immediately release lawyer and human rights defender Salah Hammouri and ensure that he can keep his residency status in Jerusalem and continue with his human rights work without fear of reprisals.

.@MinColonna @EmmanuelMacron High on your priority must be to pressure Israel to release French-Palestinian Human Rights defender Salah Hamouri and allow him to live in Jerusalem. His persecution must stop #justiceforsalah

Instantly send a tweet to Urge the new French Minister of Foreign Affairs and President Emmanuel Macron not to engage in the ethnic cleansing of Jerusalemites and to STOP THE DEPORTATION of Salah Hammouri.

.@MinColonna @EmmanuelMacron Do not be a part of the ethnic cleansing of Palestinians in Jerusalem! Stop the forced deportation of Salah Hammouri taking place Sunday [Dec 4th] #justiceforsalah

Use the social media toolkit

Sign up with your email address to receive updates and actions on our campaign.

Salah, age 15, is shot with live ammunition by Israeli occupation forces while participating in a demonstration in Jerusalem at the start of the Second Intifada. He sustained an injury in his right thigh and the bullet remains in Salah’s body until today.

Salah has been arrested six times, the first as a child at the age of 16. He has since then been arrested at the ages of 19, 32, 35, and 36, a total imprisonment of eight years and eight months.

September 2001
1 September 2001- 17 January 2002
Salah is arrested at age 16, for participating in student activities during the Second Intifada. Salah was arbitrary imprisoned for over 4½ months and deprived from beginning his school year and studies.
March 2005
Salah is arrested for allegedly planning an attack against an Israeli Rabbi, Ovadia Yosef, the spiritual godfather of the ultra-Orthodox Shas Movement and a notorious far-right racist known for his frequent calls for violence against Palestinians. Salah denied the accusations and was imprisoned for seven years rather than accepting an offer of deportation to France for fifteen years.

30 June 2020- 7 July 2020
Salah is arrested near Sheikh Jarrah medical center in Jerusalem. He is taken to al-Moscobiya Interrogation Center and his detention was extended for an additional eight days under the pretext of further investigation.

Salah is arrested, age 19, from his student dormitory in Bethlehem and placed under administrative detention, i.e. without charge or trial.
“In 2004, I was arrested again. The Minister of Defense at the time made me the youngest “administrative” detainee in Jerusalem.”

29 August 2017
Salah is put on a six months administrative detention order from 29 August 2017 until 28 February 2018. This order was extended for four months, before being renewed for an additional three months.

7 March 2022
Salah is arrested from his home in Kufor Aqab, north of Jerusalem, during a dawn raid by the Israeli occupation forces including special forces units. He is taken from his bed and forced into a stress position until transferred to a military jeep to Ofer military base.

Salah was held for 273 days in administrative detention from March 7th until December 5th.

Salah was banned for a period of six months from traveling to designated areas within the occupied West Bank from his place of residency in Jerusalem. The travel ban order was renewed twice, without any explanation, until it was lifted in September 2016. The ban obstructed Salah’s academic and professional career, as well as his social life.

Upon return from France, Salah’s partner Elsa was detained at the airport, was denied contact with her husband and family, had her belongings confiscated, and was refused medical attention despite being seven months pregnant. Elsa was deported to France two days later.
Get involved

Salah received a decision of his residency revocation on the 17th of October 2021 by the Israeli Minister of Interior Affairs. As a result, Salah lost his right to movement, work, National Social Security, and health insurance. Upon release from his current administrative dentition, Salah is at risk of forcible transfer from his hometown Jerusalem.

Salah was officially notified of the Israeli Minister of Interior’s intention to revoke his permanent Jerusalem residency status due to the so-called “breach of allegiance” to the Occupying State of Israel.

Israeli Interior Minister Ayelet Shaked announced the adoption of the recommendations to revoke Salah’s permanent residency on “breach of allegiance” charges, citing intentionally vague and broad allegations and based on withheld “secret information” confirming her intentions to proceed with approving the process.

Israeli Interior Ministry officially notified Salah of the revocation of his permanent residency status in Jerusalem.

An investigation conducted by Front Line Defenders in collaboration with CitizenLab and Amnesty International’s Security Lab, reveals that Salah, and five other Palestinian HRDs, have been hacked by Israeli NSO Group’s notorious Pegasus spyware.

GET INVOLVED WITH OTHER RELEVANT CAMPAIGNS 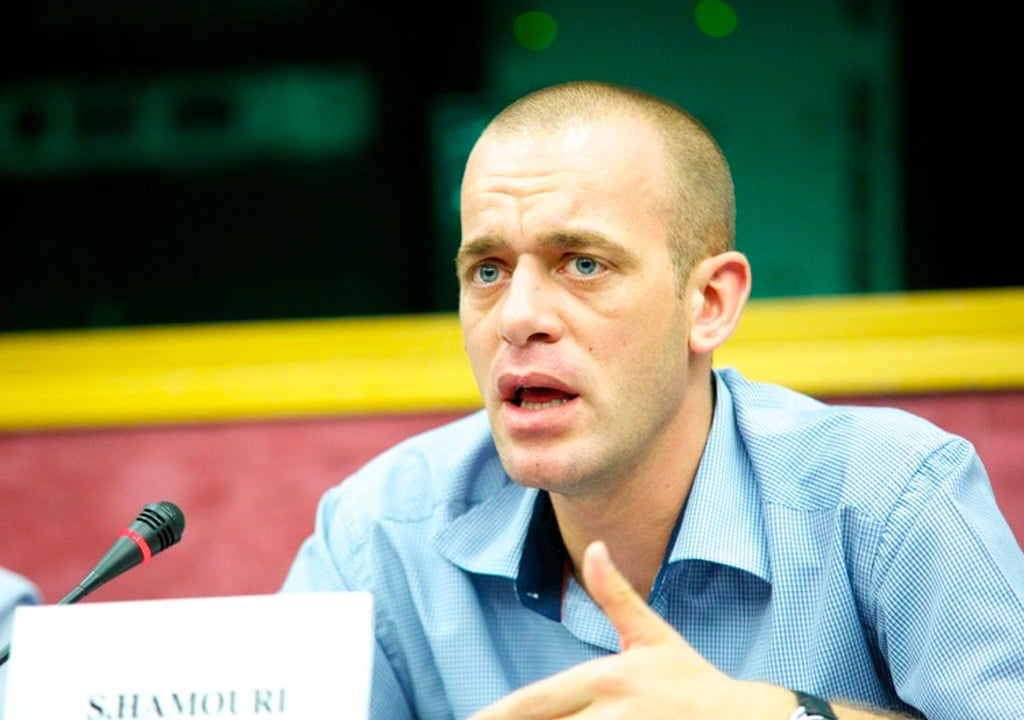 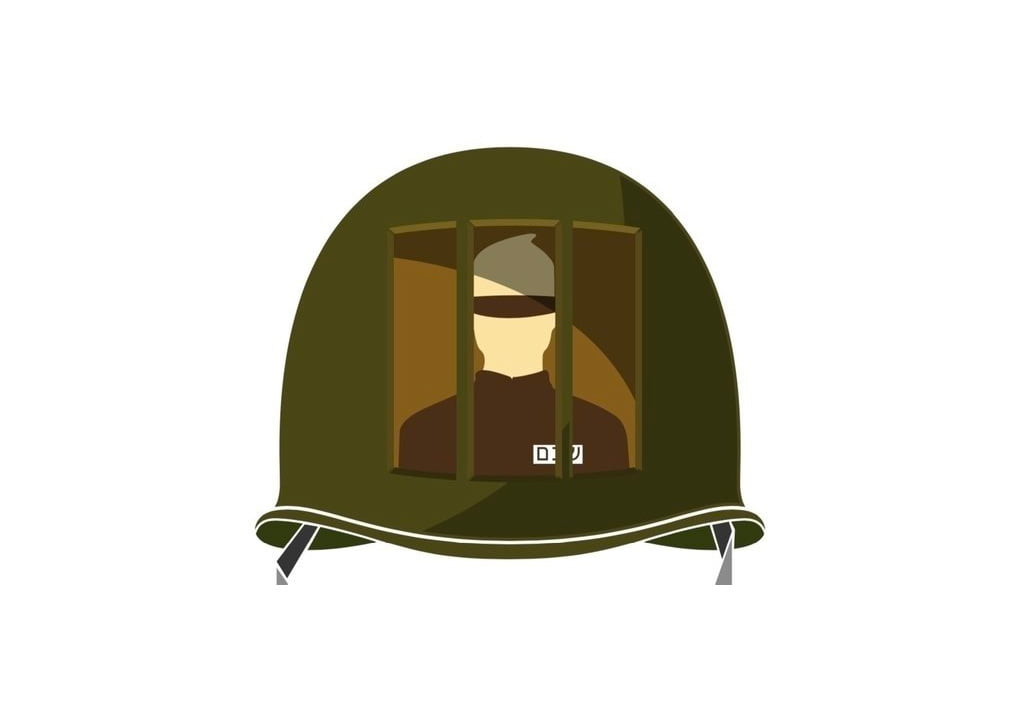 Addameer Prisoner Support and Human Rights Association calls upon its allies, friends, grassroots, civil society organizations, activists, and people of conscience to stand in solidarity with the Palestinian people and join Addameer’s global campaign titled “In the Case of the Palestinian People vs. Military Courts” #AgainstMilitaryCourts
Act now 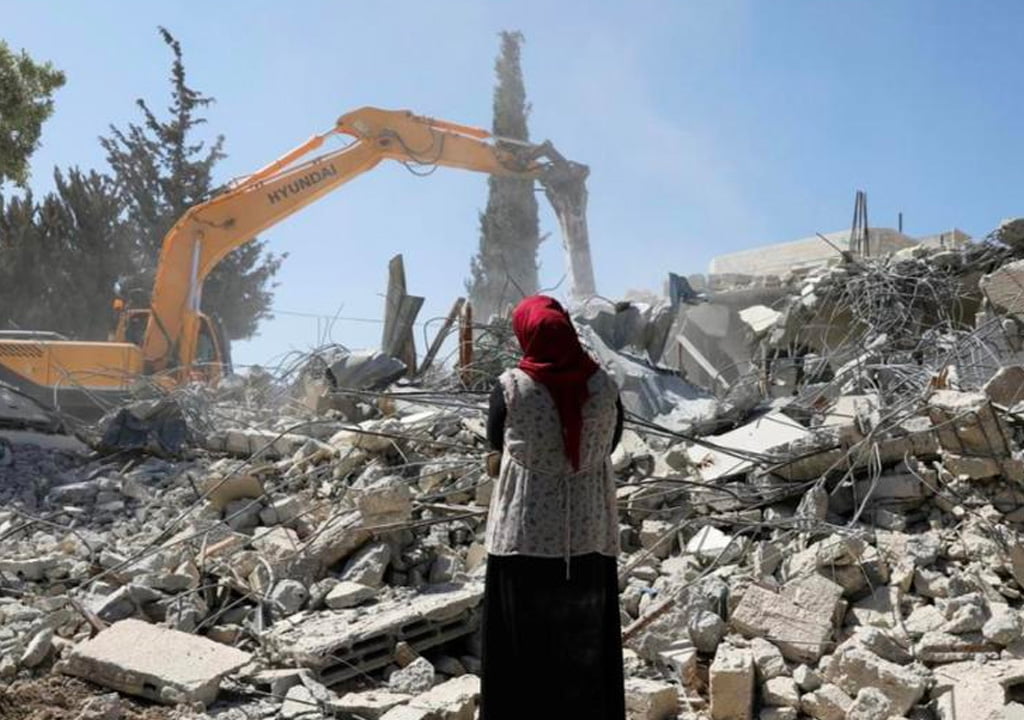 For over 73 years, Israel has forcibly displaced entire Palestinian communities and demolished hundreds of thousands of Palestinians’ homes causing terrible trauma & suffering. Over 6 million Palestinians remain as refugees and today at least another 150,000 are at real risk of losing their homes.
Act now 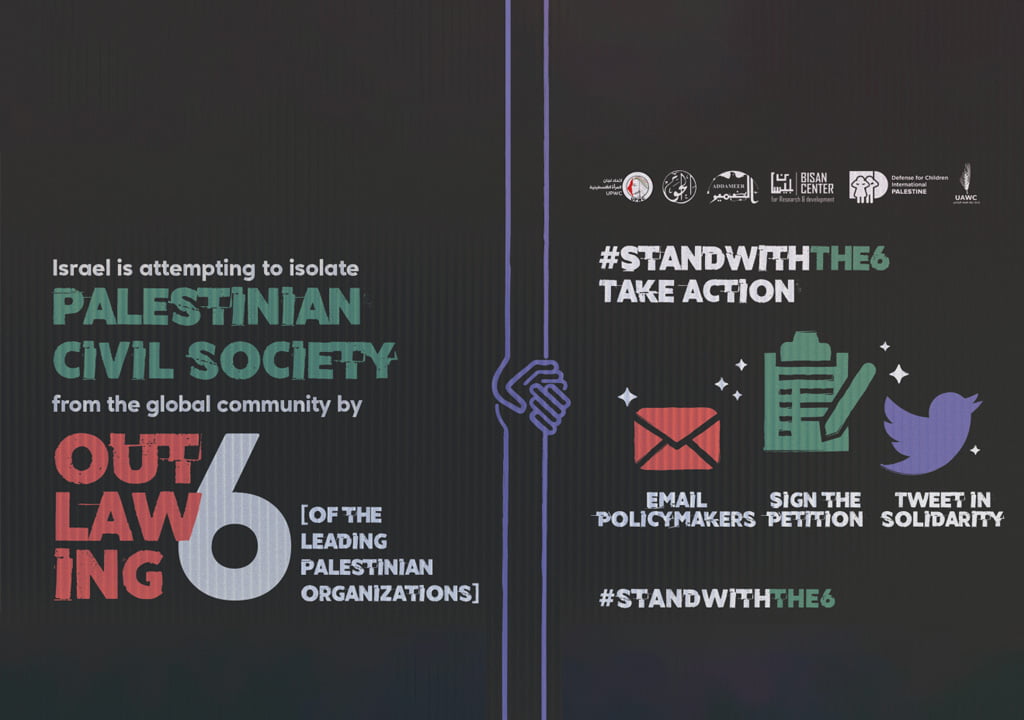 Join us in standing in solidarity with Palestinian human rights defenders, and send emails to US Secretary of State, Anthony Blinken, and Josep Borrell, High Representative of the European Union for Foreign Affairs and Security Policy to pressure Israel and oppose this decision unequivocally.
Act now